The holy month Ramadan will start on the 2nd April 2022. Ramadan is the month of purity, serenity and security. It is a month during which Muslims exert more efforts to refrain from all forms of sin, seeking repentance and forgiveness according to the teachings and values of Islam. Ramadan is the “month of the Holy Qur’an” contains the Night of Destiny (lailat al-qadr), which is recognized as a night, more valuable than a thousand months. In this night, the first verses of the Quran have been revealed to the Prophet Muhammad (PBUH). In this sense, KUDEM congratulates to all Muslims to the occasion of Ramadan and wishes a blessed Ramadan, acceptance of their fasting and good deeds.

According to Muslim scholars, the term “ramaḍān“, has many etymological roots and derivations, e.g. rain or blaze. Just as the summer rain cleans up the earth from dust and dirt, Muslims will be cleaned up by fasting of their wrongdoings. The blaze and the raging thirst caused by refraining from eating and drinking will burn the sins and wrongdoings of the one who is fasting (cf. ar-Rāzī: at-Tafsīr al-kabīr, 5/71; Elmalılı M. Hamdi Yazır: Hak Dini Kur’an Dili, 1/507).

Ramadan is a time of spiritual reflection, improvement and increased devotion and worship. Muslims are expected to put more effort into following the teachings of Islam. The fast (sawm) begins at dawn and ends at sunset. Allah rewards the believer who fasts to gain his pleasure: “[…] He has left his food, drink and desires for My sake. The fast is for Me. So I will reward (the fasting person) for it and the reward of good deeds…” (al-Buḫārī, Ṣaum, 2). Ramadan is a time for Muslims to better practice self-discipline, self-control, sacrifice, and empathy for those who are less fortunate; thus encouraging actions of generosity and charity. Thus, Ramadan is not only the month of refraining from eating drinking, but also to leave any unpleasant behaviour such as slander, lying, or chatter (rf. Qur’an, Surah Al-Baqarah, 2/183). The act of fasting is said to redirect the heart away from worldly activities, its purpose being to cleanse the soul by freeing it from harmful impurities.

As an annual recurring opportunity for solidarity, the believer learns in this month to show sensitivity and respect towards people in need. The fasting person experiences firsthand that property and wealth are not self-evident, but rather a gift of Allah and at any time are transient.

As the saying of the Prophet Muhammad (PBUH) may Ramadan bring: “blessing in the beginning, forgiveness in the middle and finally salvation from Hell” (Sahih Ibn Huzaima, 3/191) and may Ramadan bring peace, justice and blessing among the people.

إِنَّا لِلّهِ وَإِنَّا إِلَيْهِ رَاجِعُونَ In deep mourning, the news of the passing away of the scholar Prof. Dr. Raşit Küçük reached 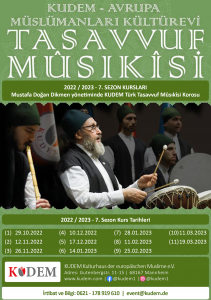 The Sufi Music Choir of the KUDEM (Culturehouse of European Muslims) starts the courses in the seventh season on October 29th. In 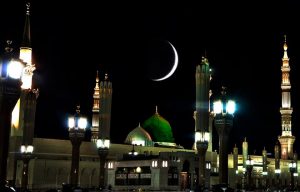 KUDEM congratulates all Muslims on the occassion of Mawlid

According to the Islamic moon calendar the Prophet Muhammad (pbuh) has been born on the 12th night of the third month Rabī’al-awwal.